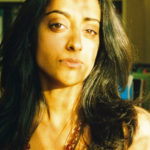 Sandeep Parmar is Professor of English Literature at the University of Liverpool where she co-directs Liverpool’s Centre for New and International Writing. She holds a PhD from University College London and an MA in Creative Writing from the University of East Anglia. Her books include Reading Mina Loy’s Autobiographies: Myth of the Modern, an edition of the Collected Poems of Hope Mirrlees (Carcanet, 2011), and two books of her own poetry published by Shearsman: The Marble Orchard and Eidolon, winner of the Ledbury Forte Prize for Best Second Collection. Most recently she edited the Selected Poems of Nancy Cunard (Carcanet, 2016). Her essays and reviews have appeared in the Guardian, The Los Angeles Review of Books, the Financial Times and the Times Literary Supplement. She is a 2015 BBC New Generation Thinker and co-founder of the Ledbury Emerging Poetry Critics scheme for BAME reviewers.

It is a matter between two wives, living and dead,
and who can guess where one ends and the other,
in shortened, enumerated breaths, begins
that loveless phrase of emptied rooms
and unpeopled letters:
yours in eternity.

One, colloidal with dust,
is powdering in upstairs rooms
by fireside lanterns of vinegar and gin,
desiccate widowhood mealing itself in air.
The other, besmattered and freaked with decay—
her face, razed by sunlight to purest whitewash,
turns towards her mantelpiece of household gods:
a silvery plate, pewter candlesticks and Hellenic vase—
its heroic scene a spear in the fist, muscular and poised to strike—
candles, a portrait of a lady in high-collars, jet beads, faraway in the eye.

V’s hands are clasped
(as if she is trying not to touch them)
Her elbow rests lightly.

There can be only one priestess
at the altar of the fair husband.
Her prayerful look is excised
en toto, clean from the ears.

Tom & Polly & Peter (the dog and cat)
invigilate the changing of the shift.

V crumbles, inverts, wanders the streets in blackshirt
repeating the childhood question up to Stoke Newington
it’s raining it’s pouring and all the King’s horses and all
in my lady’s chamber and couldn’t get up in the morning.

O O O all the King’s men in Lancashire, in Hampstead,
in Compayne Gardens ringing me thin and ransacking
the house   tedium deus    protracted life   ringing me thin
bring me gin by the fire on the lawn of Ottoline’s garden.

[A Letter dated 14 September 1939 from T. S. Eliot in London (on Criteron letterhead) to Richard Jennings: ‘Your letter arrived timely to cheer me up: I have been plunged in dust, going through and destroying old papers which ought to have been destroyed years ago: turning up unanswered letters from people who are dead, a photograph of a man who has been in an insane asylum for years, and such cemetery matter’.]