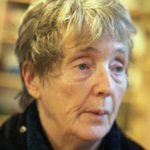 Join us for a fantastic closing event with voices from America. Ilya Kaminsky was born in Odessa, Ukraine and came to America with his family in 1993. He is author of Dancing in Odessa (2004) which won both the Whiting Writer’s Award and the Dorset Prize, among several other accolades. Poems from his new manuscript, Deaf Republic, were awarded the Levinson Prize and the Pushcart Prize. Fanny Howe is the author of more than 20 books of poetry and prose, including On the Ground (2004), Second Childhood (2014) and The Needle’s Eye (2016). In 2008 Howe won an Award in Literature from the American Academy of Arts and Letters. She also won the Ruth Lilly Poetry Prize in 2009.