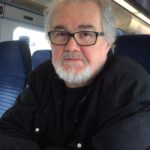 Sean O’Brien’s ninth poetry collection, Europa, is published in 2018. His Collected Poems appeared in 2012. His work has received various awards including the T.S. Eliot, Forward and Roehampton Poetry prizes. In 2016 his second novel, Once Again Assembled Here, was published, as was a chapbook of poetry and photographs, Hammersmith. His second collection of short stories, Quartier Perdu, is due to be published in 2018. He is a critic, translator, editor, playwright, novelist, broadcaster, and experienced tutor and mentor. He lives in Newcastle upon Tyne, is Professor of Creative Writing at Newcastle University and a Fellow of the Royal Society of Literature.

Dreams and Visions with Sean O’Brien