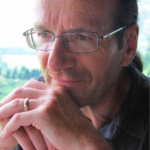 Tom Kuhn teaches German language and literature at the University of Oxford, where he is a Fellow of St Hugh’s College. With David Constantine he is the editor and translator of The Collected Poems of Bertolt Brecht (Norton 2018). He is also the series editor of the principal English-language edition of Brecht’s plays and other writings, with Bloomsbury Methuen Drama, and has numerous publications on Brecht and twentieth-century drama and exile literature, including Brecht on Theatre and Brecht on Art and Politics (both 2015) and Brecht and the Writer’s Workshop: ‘Fatzer’ and Other Dramatic Projects (2019).

When many years ago I learnt

To drive a car, my teacher made me

Smoke a cigar, and if

In the bustle of traffic or in a tight bend it

Went out on me, he chased me from the wheel. He also

Told jokes as I drove, and if

Too occupied with driving, I did not laugh, he took the wheel

Out of my hands. I feel unsafe, he said

I, the passenger, take fright, when I see

That the driver of the car is too occupied