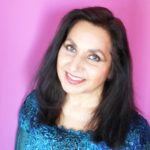 Imtiaz Dharker is a poet, artist and documentary film-maker. Awarded the Queen’s Gold Medal for Poetry in 2014, she has received the Cholmondley Award and an Honorary Doctorate from SOAS. Her collections include Postcards from god, I speak for the devil, The terrorist at my table, Leaving Fingerprints, Over the Moon and the latest, Luck Is the Hook, all published by Bloodaxe Books. She has had eleven solo exhibitions of drawings in India, London, New York and Hong Kong, and also scripts and directs video films, many of them for non-government organisations working in the area of shelter, education and health for women and children in India.